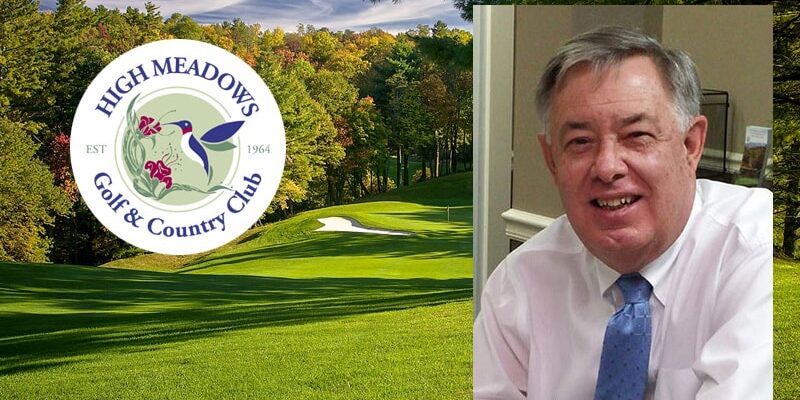 Mike West is still getting the feel for High Meadows Golf and Country Club.

Since he took over as general manager last fall, West has overseen projects big and small at the club in tiny Roaring Gap, about an hour northwest of Winston-Salem. The main floor and the dining areas are getting a face lift, but it’s the new fitness center that has him talking.

“Go back 20 or 25 years ago and look for a club with a fitness center.” he says. “Today, if a club doesn’t have some kind of fitness center, they’re behind the times. The country club life, it’s not your father’s country club anymore.”

West knows as well as anyone. For nearly three decades, he has made the rounds through the mid-Atlantic region, first as a teaching pro and later as general manager at several prestigious clubs.

High Meadows, located along the eastern part of the Blue Ridge Parkway, caters to a unique clientele. The membership is divided almost equally among year-rounders, May-to-October residents and weekenders. The Friday-to-Sunday crowd comes from Charlotte, the Triad and the Triangle.

“There’s a lot of people that say, ‘hey, it’s too hot off the mountain, let’s go up for the weekend,’” West says. “Most of the members have second homes. The club has been in a lot of families. It’s a way of life to them, to come up to the mountains in the summer. And they say, ‘someday our kids will do the same.’”

Part of West’s role is to join the members on the course from time to time, getting to know their concerns about the golf course and club. For anyone who finds himself sharing a cart with West, there are some golf stories worth pursuing.

After he finished a four-year golf career at University of North Carolina in 1982, West toiled on the mini tours of Florida before earning full-time status on the PGA Tour for the 1986 season. He played 31 events that year, including a 15th-place finish at the St. Jude Classic and a 14th at the Deposit Guaranty Golf Classic.

“It’s overwhelming at first,” West says. “You’re warming up between guys you’ve been watching for 15 years.

“I was on the range in New Orleans, warming up and minding my own business. Calvin Peete came up beside me and started hitting shots. I’m watching and thinking, ‘oh my gosh, he’s hitting drivers that aren’t moving two feet left or right every time he hits it.’ About 15 minutes later, here comes Tom Watson on the other side of me and I’m watching him thinking, ‘holy cow, what am I doing out here?”’

Life at the top of the golf world was fleeting for West. He did not earn enough money to keep his Tour card, and he played in a only a handful of tournaments the next two years as he tried to make his way back on the PGA Tour.

“I figured there were plenty of other ways to stay in golf,” West says. “It’s a difficult lifestyle. You’re travelling 30-some weeks per year.”

He took a job as a teaching professional at Farmington Country Club in Charlottesville, Va., where he still had enough game to grab some headlines. He won the PGA Assistant Championship in 1989 and played well in other national tournament for club professionals.

“I was probably a better player in my late 20s and early 30s than I was when I played the Tour,” he says. “I didn’t practice as much. I just went out there and enjoyed it. Whether I was mentally more mature, or physically more mature, it’s hard to say.”

Those memories make great stories now, but West has built an impressive resume on the business side of the game ever since. Prior to High Meadows, he was the general manager at The Golf Club at Indigo Run on Hilton Head Island. At Independence Golf Club near Richmond, Va., he launched a program that brought 3,500 kids to the course each year.

“The golf business has changed over the last 10-15 years,” he says. “You’re running a business. Your golf course at most clubs is your largest, most expensive asset and it draws most of your members. It’s nice to have my background and knowledge to roll into running a club.

“The thing I’ve learned most in this business is that not every club is the same. Whether it’s the demographics or age or interests of the members, you have to develop programs that cater to why your members joined the club.”

With so many of the High Meadows members viewing the club as a getaway destination, West wants the club feel special.

“You want the club to feel like their second home,” he says. “There’s always something going on, something interesting – for children, for all ages. As we know, the game of golf is not necessarily growing in this country anymore. Every year, we’re basically losing the same number of people we’re bringing in. You better come up with some programs that are attractive and keep your members coming to the club.”

Each morning, West makes the drive to Roaring Gap from Mount Airy, where he lives with his wife, Kathy. There is an overlook along the last stretch of US 21 just before he reaches the club, a view that reminds him of what is special about High Meadows.

“Once you get to the overlook, all your stresses and all your worries just leave,” he says. “It’s very peaceful, very quiet on top of the mountain. It’s a great spot to kick back, enjoy a little golf and enjoy being around friends.”