The unique style of Mike Strantz 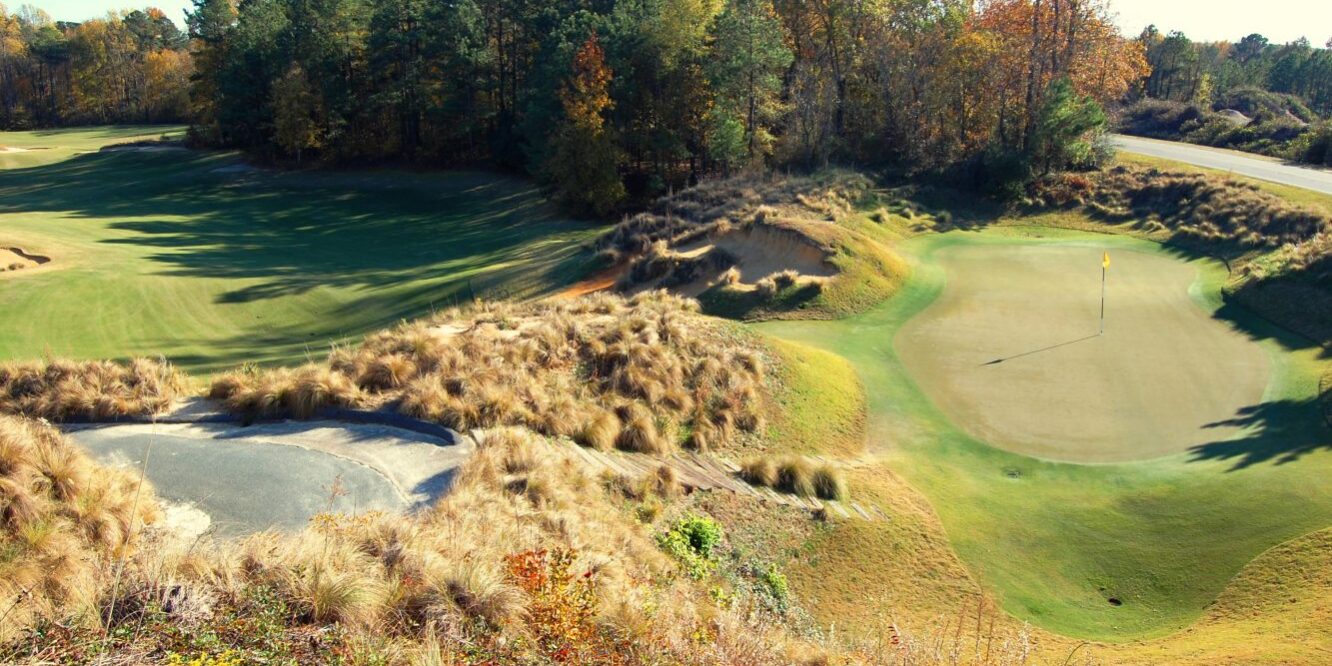 Originally a golf course superintendent, Strantz’s decade-long tutelage shaping courses for legendary architect Tom Fazio led to a solo career that consisted of just seven widely heralded original designs prior to Strantz’s untimely death from cancer at the age of 50.

Most of his creations are located within driving distance of the architect’s longtime home in Charleston, S.C.

He designed two layouts in South Carolina and a pair in Virginia — his solo debut was Caledonia (1994) followed by neighboring True Blue (1998) south of Myrtle Beach in Litchfield, SC, along with Royal New Kent (1996) and Stonehouse (1996) near Williamsburg — before putting his stamp on North Carolina.

When Tobacco Road was little more than a walking path through an expended sand quarry, Strantz said he, “knew immediately it could be something not only spectacular, but also unique.”

Under Strantz’s revolutionary eye, Tobacco Road was constructed on land tended by the weatherworn hands of tobacco farmers, later shaped and moved through mining and sand excavation before finally being crafted and molded by an artist’s imagination. “It’s the best project I’ve worked on,” Strantz said.

After completing Tobacco Road, Strantz created Tot Hill Farm, a mesmerizing gem set against the base of the Uwharrie Mountains. Winding through a maze of magnificent rock formations and creeks, “The Hill” provides its players with a vast array of heart-pounding shots and breathtaking views, and has been rated one of the “Toughest Courses in America” by Golf Digest.

A rugged, commanding figure standing 6-foot-2, with shoulder-length hair and a bushy handlebar mustache, Strantz relished his reputation as a maverick in the architecture industry.

Yet in reality, the visionary golf course designer was more of a Renaissance man: a gifted artist and golf purist, gourmet cook, music collector, college hockey player, lover of cats, dogs and horses — and most of all, a devoted family man.

At home and on site, he was often on horseback. He named his firm Maverick Golf Course Design partly for his love of animals, but also because he relished doing things his own way.

Strantz was renowned for creating hand-drawn sketches that served as the blueprints for his dramatic golfing landscapes. Fellow architects and critics referred to his courses using terms such as “sensory overload.” Yet, Strantz’s course-building technique was more of a throwback to the low-tech days of his idol, Alister MacKenzie, who designed renowned gems Cypress Point and Augusta National.

In 1988, Strantz was named architect of the year by Golf World, which later also called him the “most in-demand course designer in the U.S.” In 2000, the praise reached a crescendo when Golfweek named Strantz among the magazine’s “Top 10 Greatest Golf Architects of All Time.”

Virginia-based Royal New Kent and Stonehouse were named Golf Digest’s “Best New Course” in back-to-back years — the first time an architect had ever received such an honor in consecutive years.

In 2002, Strantz unveiled his last East Coast design, Bulls Bay near Charleston, and that same year he performed a redo of the private Silver Creek Valley Country Club in San Jose, Calif.

Now, after closing briefly, one of his most well-known designs has received a total makeover. Located midway between Richmond and Williamsburg, Va., along the gateway to Coastal Virginia and the Outer Banks, Royal New Kent was widely hailed as a masterpiece when it originally debuted.

Consistently rated as one of the Mid-Atlantic region’s finest layouts, Royal New Kent is a Virginia original sprinkled with Irish seasoning. Strantz paid tribute to the fabled seaside links of the Emerald Isle, with an emphasis on the character and feel of two of the architect’s favorites — Ireland’s Royal County Down and Ballybunion.

But during the past decade, Royal New Kent began to lose its luster.

“At Royal New Kent Golf Club we are celebrating the dawn of a new day,” said new general manager and director of golf Chip Sullivan — a popular PGA professional and one of the country’s most accomplished players.

To thoughtfully return Royal New Kent to the club’s original grandeur, Wingfield Golf partnered with local resident and golf enthusiast Willie Downs. Many of the course’s most devoted fans provided original photographs that assisted in the renovation. Strantz’s vision was captured in hand-drawn sketches that served as blueprints for his dramatic golfing landscape. Wingfield even brought back two of Strantz’s shapers who constructed the course to help oversee the restoration.

“All that information allowed us to get us back to Mike Strantz’s vision and what he designed,” Sullivan said. “Royal New Kent’s ‘wow factor’ is off the charts again.”

During the restoration, Royal New Kent’s green complexes were converted from bentgrass to the more heat-tolerant Champion Bermudagrass. Wingfield Golf trucked in 2,300 tons of new sand to reconstruct the Royal New Kent bunkers, making the golf course more playable and easier to maintain. The upgrades to the irrigation system include a new pump station, and all 120 inlets were rebuilt for better drainage. Meanwhile, substantial clubhouse upgrades were also performed.

“Mike Strantz was a tremendously talented and gifted architect whose career was, unfortunately, cut short,” said Wingfield Golf CEO Barton Tuck.  “It’s an honor to have the opportunity to take one of his best back to what he originally designed and get it back in tip-top shape.”

Strantz lost his courageous, three-year battle with cancer in June 2005. His wife Heidi, and daughters, Andrea and Dana, survived him.

“We are pleased and honored to play a part in preserving Mike Strantz’s legacy for golfers to enjoy for many years to come,” Sullivan said.