Harvey shares the wealth with most recent USGA victory 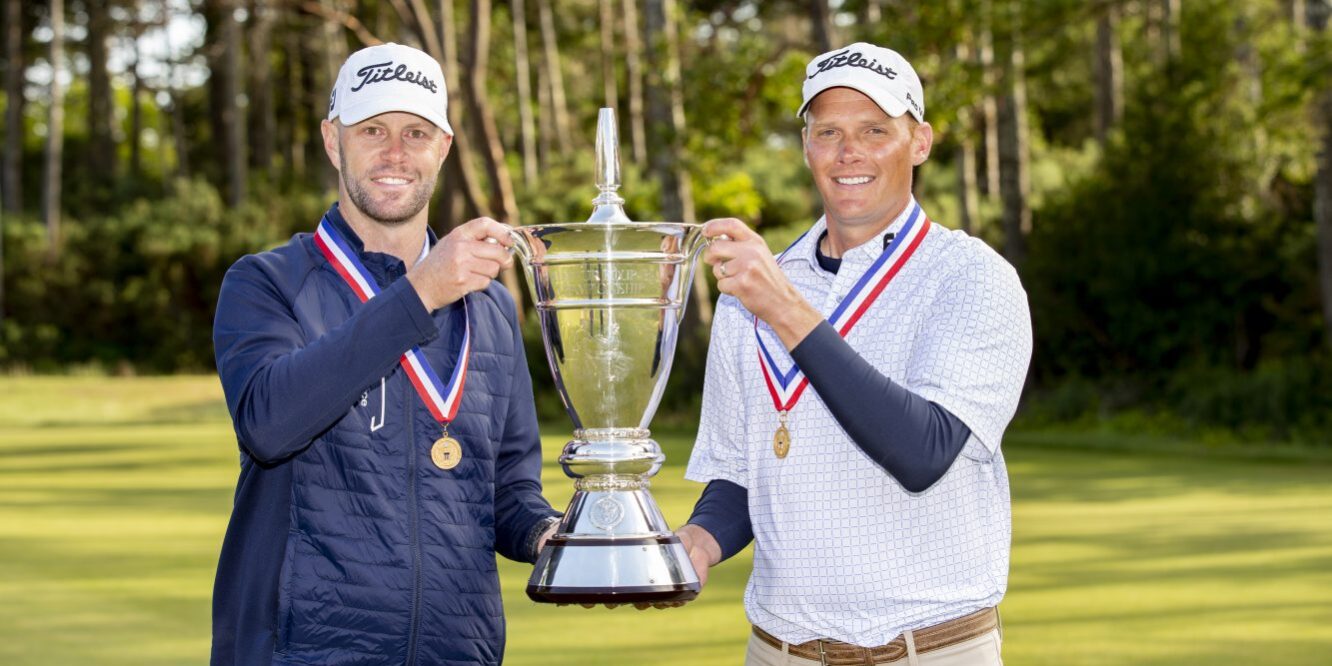 Scott Harvey isn’t the kind of guy who goes about ranking his golfing accomplishments, this above that.

One reason, there’s too darn many. Harvey, 41, of Kernersville, has done everything from represent the United States in the 2015 Walker Cup Match to qualify for the 2017 U.S. Open. He has won more individual titles and trophies than you can shake a pitching wedge at.

But press him a bit, and Harvey, a property manager by trade, will admit that winning the 5th U.S. Amateur Four-Ball Championship in Bandon, Ore., last month places near the top of his golfing thrills. Harvey accomplished the feat at Bandon Dunes Golf Resort’s Old Macdonald course.

His playing partner was Todd Mitchell.

“Any USGA championship is really hard to come by,” Harvey said. “This one, you get to share, which is very unique in golf. To share with a friend is really special.”

This year marked the fifth time that Harvey and Mitchell, 40, of Bloomington, Ill., have competed as a team in the USGA Amateur Four-Ball Championship. They’ve been forces to be reckoned with each time, including a semifinal showing in 2015, the event’s inaugural year.

This time around, Harvey and Mitchell defeated Logan Shuping, 21, of Salisbury, and Blake Taylor, 21, of Wilmington, 2 and 1 in the 18-hole championship match. Shuping and Taylor are both rising seniors at East Carolina University.

Harvey said it wasn’t until he approached the first tee of the championship match that he realized three of the four players were residents of North Carolina.

“I remember thinking, ‘That’s great,’” Harvey said. “That speaks volumes as to the quality of golf that’s being played in North Carolina.”

Harvey was impressed with the play and manners of Shuping and Taylor, who had their fathers serve as their caddies.

“They were extremely nice young men,” Harvey said of the opponents that he and Mitchell faced. “Somebody’s got to win and somebody’s got to lose, that’s just the way it is. But these guys couldn’t have been more gracious. And they’re very talented. They’ve got great golf careers ahead of them.”

Mitchell and Harvey grabbed an early 2-up lead in the final, thanks to consecutive birdies on Nos. 5 and 6. But Shuping and Taylor responded, Taylor holing a 3-foot birdie putt on the seventh. The match turned even when Taylor holed another birdie on No. 10.

Shuping and Taylor took their only lead when they each hit approach shots within 5 feet on No. 14. Meanwhile, Harvey and Mitchell both flew the green and registered only their second bogey of the 116-hole championship.

Shuping and Taylor appeared ready to up their lead on the 14th hole, a 285-yard par 4. Shuping drove the green, but three-putted. Mitchell made an up-and-down birdie from below the green to tie the championship.

“That was the shot of the match,” Harvey said. “Then when (Shuping) three-putted, everything went in our direction. Yeah, I felt like 14 was the match.”

Mitchell, a former minor league baseball player who spent a season with the Greensboro Hornets, birdied the par-5 15th hole to put him and Harvey 1 up. On the par-4 16th hole, Mitchell hit a 155-yard shot to within 4 feet to set up another birdie.

The match concluded on the 17th hole, with the teams making matching pars.

Harvey met Mitchell through golf, the two through the years playing as teammates and competitors in numerous events. A bond grew between them.

Mitchell takes it a step further.

“I mean, we live, I don’t know, 800 miles away, and we talk every day; every single day,” he said. “There’s not a day that goes by unless he’s on vacation somewhere that we don’t talk. And to share this with him means everything.”

Asked if he and Mitchell would be back to defend their championship at the 6th U.S. Amateur Four-Ball Championship scheduled for next May at the Cricket Club in Philadelphia, Harvey replied, “Oh, yeah.”

For winning the championship, Harvey and Mitchell get custody of the U.S. Amateur Four-Ball trophy for one year and receive gold medals. Their names will be inscribed on a USGA trophy and be forever immortalized inside the USGA Golf Museum’s Hall of Champions.

They also earn a 10-year exemption into the championship, provided their team remains intact. Shuping and Taylor received silver medals and a three-year exemption from qualifying.

As well as Harvey continues to play, he said he “scaled it way back” a year ago in terms of how much time he devotes to golf. He and his wife, Kim, had a son, Gavin, born last October. The couple also have a 9-year-old son, Cameron.

Harvey spends much of the time he used to devote to playing golf helping coach ball teams on which his oldest son plays.

“I’m having fun coaching,” he said. “It’s all about family now.”

Family is one of the big reasons Harvey has gone as far as he has in golf. His father, Bill Harvey, who died in 2013, owned Sedgefield Driving Range on High Point Road. Scott basically grew up at the facility.

“I got off the school bus there, that was pretty much my whole life,” he said. “My father, he taught me everything about the game. A lot of character building went on at that place.”