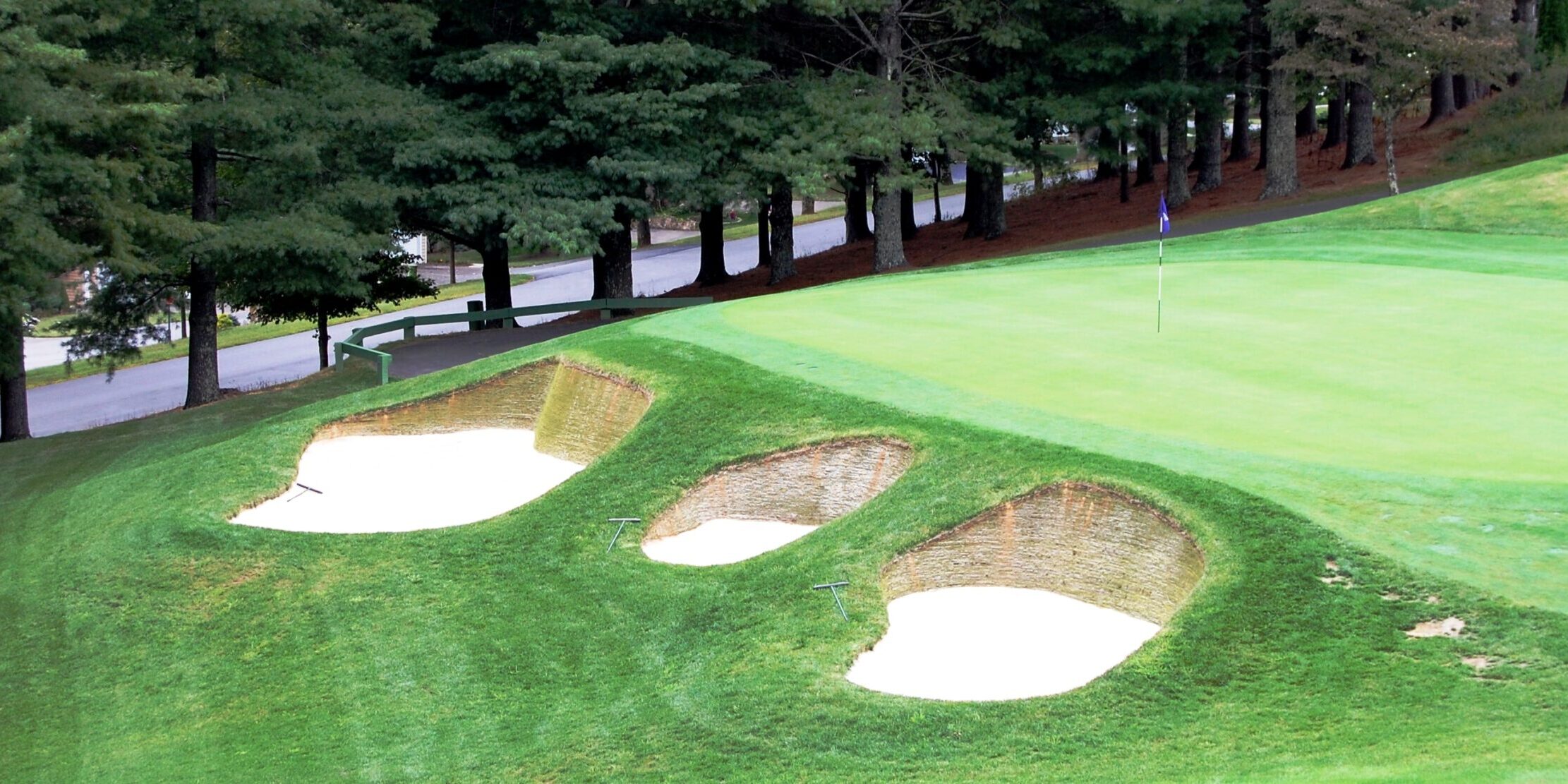 Tucked into the northwest corner of North Carolina, in the heart or Christmas tree country, bordering the rafting and canoeing experiences of the New River and just a 10-minute drive to the Blue Ridge Parkway, sits one of the state’s best golfing layouts.

In case you haven’t been to Jefferson Landing Club in the past few years, or ever at all, there’s no better time than this fall to escape for a day or weekend to Jefferson, N.C., as ownership has invested in an architectural redesign by Greensboro’s Kris Spence and significant upgrades to its 17-room lodge.

Spence is noted for his work on Donald Ross courses across North Carolina and the Southeast, but agreed to tackle this Larry Nelson design after several meetings with Mark and Eddie Vannoy, the owners and partners of Vannoy Construction whose family developed this property in the early 1990s.

“The golf course was originally built in the modern context of a depressed fairway with rolling mounds,” Spence said. “They moved a lot of dirt building it and that’s not natural of a 1920s design, so it was not necessarily in my wheelhouse to work with a property like that. But after meeting with the Vannoys I enjoyed sitting down with them and agreed to tackle the project.”

Spence, who has worked on such esteemed courses as the Country Club of North Carolina (Dogwood Course) and Sedgefield Country Club, has added his touches to the Jefferson Landing course over the last 2-3 years.

“I like the way it turned out,” Spence said. “I got just enough of my old-school, traditional architecture in there. We greatly enhanced the golf course to where the greens are much more defined and there is a little more thought process now when golfers play the course, playing in-and-around the bunkers and setting up angles.”

Spence is being modest. Jefferson Landing thought enough of his work to add his name to the scorecard alongside Nelson’s as a 2018 redesign and in my opinion has elevated the new layout into one of the must-play mountain experiences and a top 25 course in North Carolina.

“The course was built almost three decades ago and it was already a good golf course but Kris made it even better,” said longtime director of golf Dean Spainhour.

And the Vannoys added their own touch, too. The 18th hole, which featured a lake near the tee, now has a creek guarding the left side of the fairway and finishes with a waterfall by the green, reminiscent of Quail Hollow’s finishing hole in Charlotte.

“Mark and Eddie like to travel and play at some of the better golf courses so they would go and play and come back with various ideas that they would implement themselves,” Spence said. “That creek and waterfall was one of them.”

The brothers also had another interesting idea to run by Spence. They wanted the relatively lackluster par-3 14th hole to be given some character.

“Mark had an interest in doing these sod-wall bunkers,” Spence said. “And Eddie had talked to me about wanting the 14th hole to be very memorable. He said, ‘I want people to leave here and have this hole in their minds.’ I told them that sure we can do that but they are going to be awful deep and very dramatic, and frankly they are going to be difficult to get out of. They are basically going to be the (St. Andrews) Road Hole bunkers. He said, ‘Let’s go for it.’”

“Those are really cool,” Spainhour said of the three deep bunkers. “Everybody now tries to hit enough club to get over them, but if you do hit it into them you could be in there for a few days.”

Spence also added sod-wall bunkers on the 7th and 12th holes as part of his overall redesign of the bunkers, which included the Better Billy Bunker system and all new sand. The back nine fairways were also sodded with bent grass and all the tee boxes were leveled and expanded.

“We brought in bent grass from New Jersey and we took the bunkering and put it into a little more of a strategic positioning, which really tried to accent the angles of the golf course, opened up some of the approaches to give a lot more opportunity for golfers to bounce a ball into the green – things you see on the older golf courses. It is still the Larry Nelson routing and his greens.”

Extensive tree removal was also accomplished to “peel back” fairway sight lines, and wispy native grass areas were created to “give the course more of a meadow look because it does sit in this nice big bowl and you see these surrounding pastures and meadows,” Spence said.

“We lowered the tees, tapering the slopes out and put a bigger top on because they were undersized, and rebuilding the bunkers required us working around the greens and taking out some of the more modern features of the golf course, creating some chipping swales and resetting the bunkers up tight to the greens,” added Spence.

Water comes into play on 16 of the 18 holes as Naked Creek, with large boulders guarding its banks, serpentines its way throughout the course.

Spence also added a four-hole short course that is situated near the clubhouse and newly renovated lodge. There are future plans to cross the road in the next few years and create five more holes to give Jefferson Landing its own short course, Spainhour said.

“If somebody has some energy left and had a few drinks they can step outside the clubhouse and play the short game and settle a bet; it’s sort of a calming gathering type of area. They have made some really nice improvements here,” Spence said.

The fall rate, weekdays or weekends, is $89 per person.

“It’s not a true mountain course to where it is up-and-down all the time,” Spainhour said. “It is built in a little valley. One of the good things about this course is you don’t have any blind shots and most shots play either level or downhill. Seniors and older people can get around here pretty good.”

“I’ve been to a lot of places, but this is one of the most beautiful areas I’ve ever been to,” added Spence.