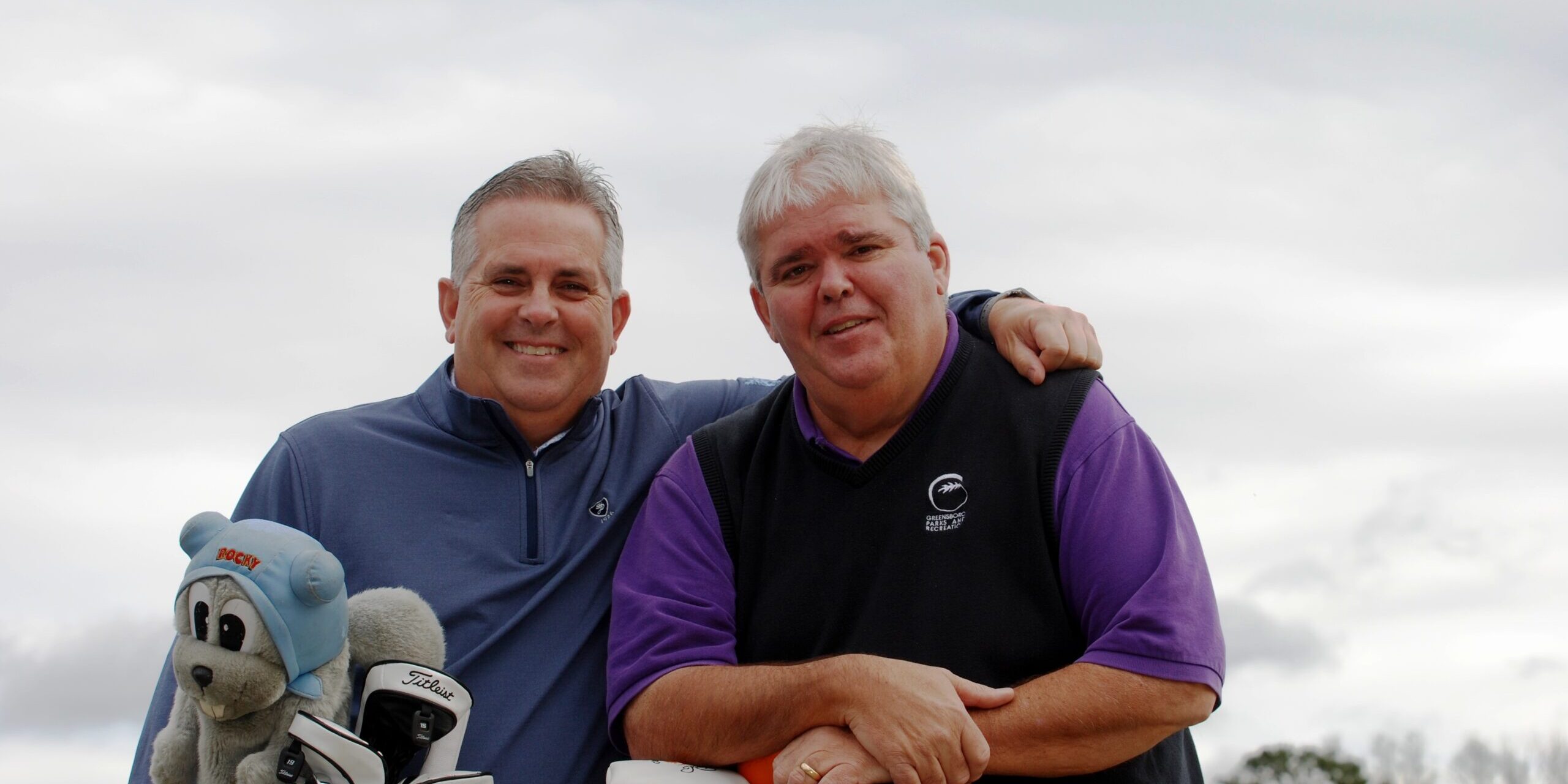 Bob and Rocky Brooks, brothers separated by 18 months, excelled in just about every sport imaginable growing up, except golf. That’s what drew the two siblings to the sport even more.

On occasion, Bob Sr., an Air Force man who moved the wife and infant kids from Nebraska to Hawaii to Wyoming and then to Ohio, would take Bob Jr. and Rocky to a nine-hole golf course as they headed toward their teenage years. That’s where the boys befriended the golf pro and learned how to navigate the game despite shooting over 100.

“We just got hooked. And we used to say ‘we’re not very good at this now but we will be.’ And it drove us crazy,’’ Rocky said.

The family then headed south to North Carolina, settling in Charlotte with an apartment off the first fairway of Pawtucket Golf Club. After a year, it was off to the eastern part of the state and Wilson as the two boys attended Beddingfield High School and became more and more attached to golf.

Elder brother Bob, who was and still is into vintage cars, recalls painting stripes on the range balls at Happy Valley Golf Course so younger brother Rocky could practice for free.

While the two loved the game a career in golf didn’t appear to be in the cards as Rocky attended Atlantic Christian (now Barton College) and Bob logged just one semester at Wilson Tech before losing interest and joining his father at a trucking company.

And it was shortly thereafter that each was headed to an Air Force recruiter’s office on different occasions before there was a freak of fate – two freaks of fate actually.

“I knew I didn’t want to be an accountant so I had this bright idea I was going to enlist in the Air Force,” Rocky said. “So I make this appointment with this recruiter and I am all set to go. At the time I was living at a fraternity house at school and the phone rings and it’s the recruiter and he tells me he has to reschedule. I was on the golf team so I went to the range and was hitting balls and one of my former teammates was there and I told him about the Air Force thing and he started laughing and said I wouldn’t last three days in the military.”

Rocky never returned the recruiter’s call and proceeded to take a job at Carolina Lakes Golf Course in Sanford for the summer, which was the beginning of his venture into the golf business.

Meanwhile, Bob actually was on the road to see an Air Force recruiter and had a change of heart.

“All I had to do was sign the papers and I got halfway there and turned around and said ‘Nope, I don’t want to do this,’” Bob said.

Bob proceeded to get married in 1986 and bounced back and forth between Georgia and Kentucky because of his wife’s job. He was working at a car dealership when he recalls befriending a top local golfer who hooked him up for an interview at Oak Haven Golf Club in Macon, Ga., where he was hired as an assistant golf pro.

When Bob got divorced in 1994, Rocky floated the idea to his older brother about the possibly of him coming back to North Carolina. Rocky called in a favor to a local pro at Bryan Park and Bob has hired in his first position in the public golf sector after logging close to a decade on the private golf front.

It was there that Bob met his second wife and later took a position at Gillespie Golf Course.

Rocky worked seven years at Sapona Golf Swim and Tennis Club in Lexington before landing his position as director of golf at Sedgefield Country Club, a prestigious Donald Ross layout that hosts the PGA Tour Wyndham Championship. Rocky has worked at Sedgefield now for two decades.

“We were both in the golf business but we were hundreds of miles away from each other when we first started. We would talk some but I would only see him at Christmas because that’s the only time he could come home,” Rocky said of Bob. “But by the 1990s we were both committed to being in the golf business. It’s what we know. It’s what we’re good at. And all of the sudden it became the Brooks Brothers are golf pros in the Greensboro area.”

After 10 years at Gillespie, Bob left for another position in the Triad area before returning to the nine-hole layout in 2012, where he has been ever since.

Bob has had 10 surgeries and counting, including both knees and hips being replaced, and walks with a slight limp. Bob is an imposing physical presence who was a top-notch catcher and football player growing up, while the 5-foot-8 Rocky received the name he now goes by as a small kid who took down a bully by throwing a rock that connected between the eyes.

Both are award-winning professionals. Bob won the Carolinas PGA Junior Golf Leader Award in 2002, while Rocky this past year was tabbed as the section’s Golf Professional of the Year – arguably the nation’s largest PGA section’s highest honor.

“His journey in golf certainly has had many more turns than mine.” Rocky said of Bob. “Mine is pretty much a straight line.”

In addition to his award-winning instruction of juniors, since 2017 Bob has been running the Greensboro chapter of PGA HOPE, a program that introduces golf to military veterans with disabilities to enhance their physical, mental, social and emotional well-being.

Two brothers working as golf pros may not necessarily be that unique, but two golf pros from the same family applying their trade in the same city is kind of a cool connection that you don’t see every day.

And each are at opposite ends of the spectrum. Rocky works for McConnell Golf in a high-brow private setting, while Bob’s focus is junior golf development and affordable play working for the City of Greensboro at a municipal course in a minority section of town.

“It’s different but it’s the same,” Bob said. “Rocky has a membership he has to serve and I have the general public as my members, and with me that changes daily, but we’re in a customer-service oriented business. You can have the greatest golf course in the world but if a guy walks into the golf shop and he’s treated poorly it kills the whole thing. Sure, I’m at a nine-hole muni, but everybody is here to do the same thing — whether I’m at Sedgefield or Jamestown or Grandover Resort– they are here to play golf and have a good time. It’s important to us to provide them with an environment that is friendly and enjoyable. That’s what Rocky and I both are.”

While Bob Sr. was a strict military disciplinarian, the outgoing personalities of Bob Jr. and Rocky were molded by their mother May, who is now in her 80s. Bob Sr. passed away two years ago.

“A lot of what you see us do each day comes from our mom,” Rocky said. “For some unknown reason it’s so rewarding to us to know you and your three friends went out and played golf and enjoyed yourselves and had a great experience because it’s our job to provide you with that great experience. It’s as rewarding to us as you could ever imagine. Have you ever met rich golf pro? There are not many. So, we don’t do this for money.”

“To say Rocky is a ‘pro’s pro’ would be an understatement,” added Chad Flowers, Triad membership director for McConnell Golf. “He is the epitome of what any member would strive to have as the director of golf at their club. On top of having the finest pro shop in the area, Rocky’s office door is always open and he is ready and willing to speak with anyone about anything on their mind at any time.”

Bob laughed when asked if he’s jealous of Rocky rubbing shoulders with some of the game’s top names such as Webb Simpson and Davis Love III.

“No, but he knows when I call in August what I’m looking for — tickets to the Wyndham,” Bob said.

The two brothers are physically close in the same town, performing the same line of work, but admit they don’t see each other enough because of their busy lives and busy professions that produce long days. They couldn’t recall the last time they played golf together.

As they sat down for this interview and began to reminisce about old times, and rib each other about their memories of names of golf courses or last names of old friends, I made them make a promise to me. They would play at least one round of golf with each other every year starting in 2021.