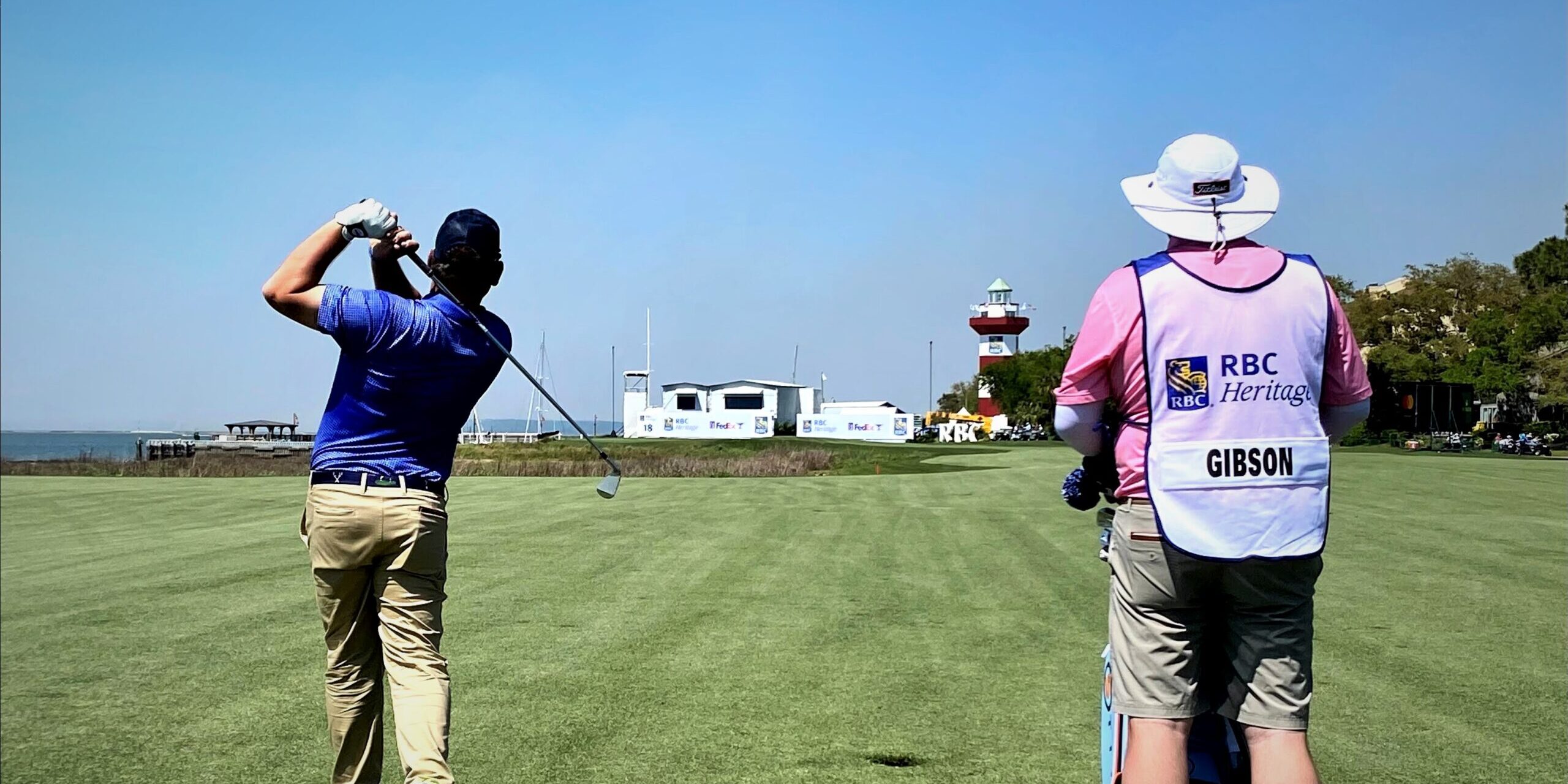 Tommy Gibson has made his mark in North Carolina golf over the last decade. He’s one of the more successful players on the Carolinas PGA circuit and has held positions at such prestigious clubs as Quail Hollow, Charlotte Country Club and for the last five years at Old Town Club in Winston-Salem.

But a little piece was missing for the 32-year-old assistant pro. Gibson, whose father Tom played in two Honda Classic tournaments in the mid 1980s, had never played in a PGA Tour event.

“I started playing tournament golf at 6, and ever since then I said to myself I was going to grind and try to get out there and make it,” the younger Gibson said.

When Gibson won the Carolinas PGA Professional Championship last July he qualified to tee it up in the RBC Heritage on Hilton Head Island.

In order to help him prepare for his dream tournament this April, Gibson traveled to South Carolina in February with a few Old Town members to log two practice rounds at Harbour Town Golf Links, a course Gibson had never played before.

“The course was a lot different than it was in the RBC Heritage,” Gibson said. “It was pretty wet and the ball wasn’t going very far. I played as far back as you could go, on the edge of every tee box just to get the full affect to see how hard it could play, how long it could play. The yardage is pretty similar to Old Town, around 7,100, so I was really comfortable with the yardage. I was a lot more comfortable than playing a place like Quail Hollow, where it’s like 7,600 yards and I’m hitting a 3-iron into every par-4. My first initial though was ‘if I can just find the fairways I could have a decent chance of making the cut.”’

Gibson said he was calm as he headed to the course for the first round in mid April with Brad Luebchow, his caddie, good friend and director of instruction at Maple Chase. Gibson even got looser on the first tee when a PGA Tour official started rattling off a list of clubs during an equipment check. There was one catch, the sheet the official was reading from were for Tom Gibson, his father, not Tommy Gibson.

“The guy comes up to me and says ‘You need some better equipment,”’ Gibson said. “My caddie and I are looking at each other said, ‘What is he talking about?’ It kind of hit me since I used to play my dad’s hand-me-downs that those must have been my dad’s clubs he used from the early 1980s. I went over to my dad and said ‘you’ll never guess what happened; this guy is rattling off all these clubs that I remember playing when I was 10. It was hysterical, and that got the day off really smoothly, to have that kind of chuckle right before I teed off was so cool.”

Gibson’s first few holes of his PGA Tour life were beyond memorable.

He almost chipped in on his very first hole, hitting the cup. “Half of my pitch mark was in the hole and the other half was outside the hole, and when it hit the edge of the cup it killed it and it rolled to within 4 feet.”

It was a simple putt – downhill and down grain – straight in the hole.

“If you just blow on the ball it was going to roll into the hole,” Gibson said. “My hands were shaking so badly. I barely made contact with the ball and I left it short and left. Brad just looked at me and says ‘Really, that’s how we’re starting the day? You’re going to hit it to 4 feet and then leave it short?’’’

That would have been the easiest birdie of the first three holes.

Gibson sank a 12-footer for a 3 on his second hole, then after catching a bad break on a drive that landed in a divot and hitting his second shot short of the green, he jarred a shot from 35 yards for his second birdie in three holes.

“I’m playing with a local guy and we have like 200 people following us and you felt the ground shake it was so loud,” Gibson said of his chip-in reaction. “Brad came running at me and hit my hand so hard it was numb for about 30 seconds.”

“Brad looks at me and says ‘You need to write a book on your first 6-hole experience.’ It was so silly,” Gibson said.

Gibson’s two-day performance was more than respectable as he carded a 73 (which included two three-putts and two out-of-bounds penalty strokes) and a 71 to miss the cut by four shots.

After all the excitement, Gibson was back at Old Town Club, taking tee times, giving lessons and playing a round or two with the members – and dreaming.

“Hey, Tom Lehman was a golf pro and ended up getting on the PGA Tour,” Gibson said. “There are so many ways to get out there, and it’s still a goal of mine to play on the PGA Tour full time. It’s probably not likely, but you keep grinding and you keep making small pieces of success and you just never know what’s going to happen.”