Longleaf: On the right track 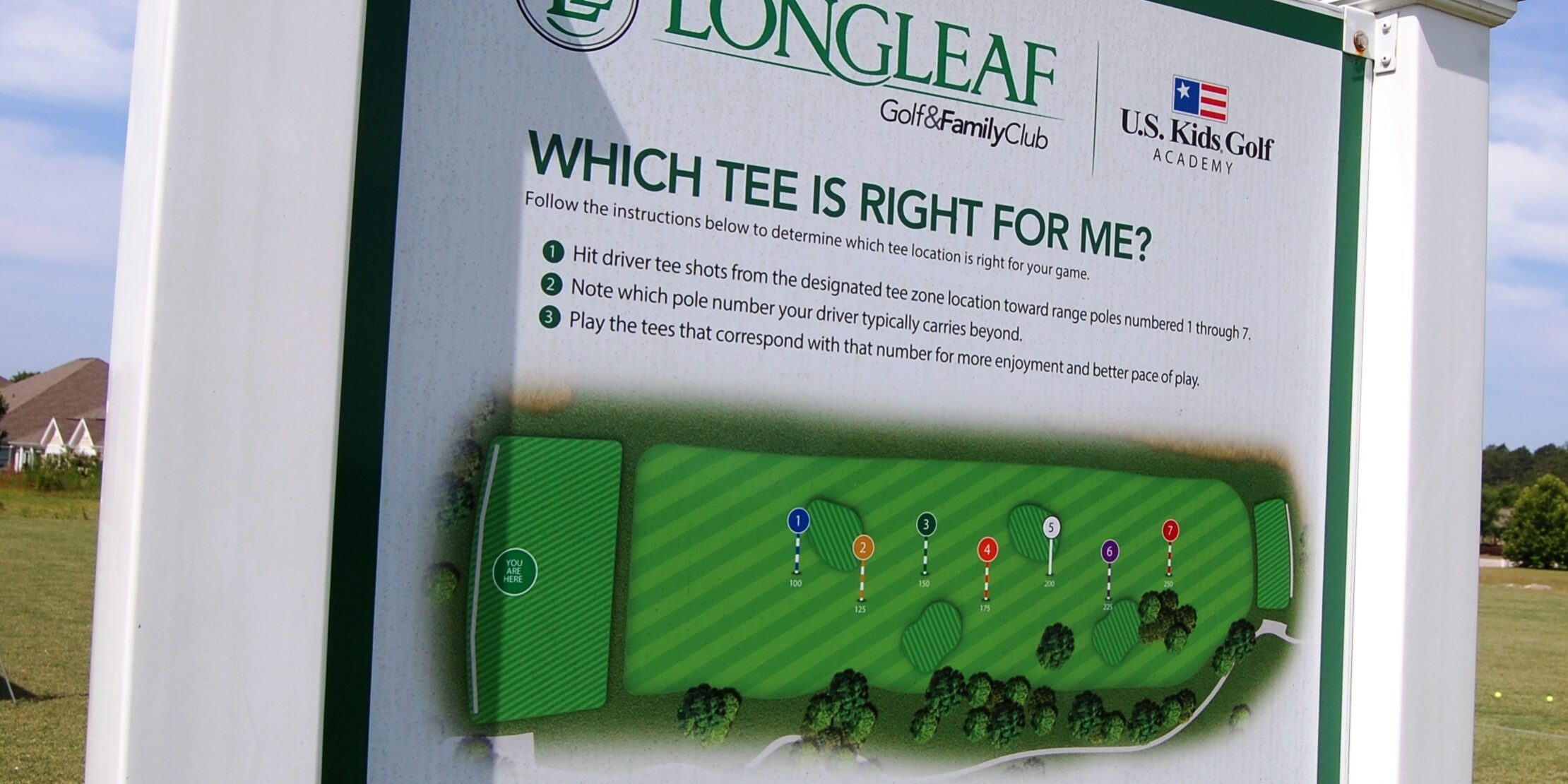 When most golfers think of Pinehurst, a high-end resort where U.S. Opens are held comes to mind.

But 4 miles away on Midland Road in Southern Pines, Dan Van Horn has a different vision of golf. And he believes it’s the future of the game.

In fact, Van Horn may be the one of the most revolutionary figures in golf.

More than 20 years ago, he founded U.S. Kids Golf, which is designed to bring youths into the game and hopefully keep them there for life. He developed a series of lighter golf clubs that kids could swing easier.

Then he brought the U.S. Kids World Championship to the Pinehurst area, where it will be held for the 12th straight year in August.

Two years ago, the Atlanta resident bought Longleaf Country Club in Southern Pines and renamed it Longleaf Golf & Family Club. It serves as sort of a headquarters for U.S. Kids Golf. Now, he is pouring money into renovating Longleaf.

But his grandest idea yet is being implemented at the course. It is called the Longleaf Tee System. It gives the course seven sets of tees and golfers should use the tee based on how far they hit their driver. There is more information about the system at longleafteesystem.com.

“We call this ‘a living laboratory of learning what to do’ and hope to be an inspiration for the whole industry,” Van Horn said. “We can bring professionals here and talk to them about our tee system and how it impacts people. We can talk to them about our junior program and how kids are brought in from the outside and learn how they stay with it.”

The renovations at Longleaf began last year when a 10,000-square-foot putting green was installed, a six-hole, par-3 course was built and the practice range was enlarged. The nines were also reversed to put the first tee next to the practice range.

Maybe it is Van Horn’s attention to detail that has made U.S. Kids Golf successful. He is not satisfied with the putting green so it is going to be torn up and rebuilt with more undulations to make it more challenging. On a one-day visit to Longleaf in early June, Van Horn spent 10 minutes talking to a landscaper about where some trees should be planted to funnel golfers in the right direction as they walk off the 18th green.

Of course, their conversation was nearly drowned out by the noise of saws and a beehive of workers moving all around them.

“I’m trying to explore what it’s really like to be in the golf club business,” Van Horn said, “and try to rejuvenate it or rekindle the spirit of it, and bring kids and families into the game. Until we got on this side of the business, I really didn’t understand what it’s like to run a course and what the challenges are to do that.”

Figuring out the tee system is easy and begins on the practice range in the tee assessment area. A player hits his driver toward color-coded posts on the range that begin at 100 yards and are spaced 25 yards apart to 250. Based on how far the player can carry his driver in the air, that determines which set of tees he should use. All seven tees with yardages are marked on the Longleaf scorecard.

Jeff Cowell, the Longleaf director of golf, said the tee system is not a suggestion.

“Everyone should play the correct tees,” he said. “Then the course is scaled to your ability. It just makes so much sense. There’s no men’s tee, there’s no women’s tee. Every tee is rated for men and women. It’s such an easy thing to understand. It’s not based on age or gender, just ability. If you hit some good shots, you’ll make birdies.”

Jim Hardy, the director of the U.S. Kids Golf Academy at Longleaf, learned firsthand how well the system works. A female member asked him which tees she should play. Hardy took her to the assessment area and learned she should be playing from the shortest distance because she hit her driver about 100 yards in the air.

“She broke 80 for the first time,” Hardy said. “I knew then we were on the right track for sure. We’ve had women make their first eagle or even their first birdie.”

Besides making the game more enjoyable, the tee system speeds up play. Cowell said four-hour rounds are common at Longleaf now no matter what the player’s ability is.

“Dan started scaling the golf course for U.S. Kids tournaments so kids could have success. But this works for everybody,” Cowell said.

Hardy, a Houston native, moved from Texas two years ago because he wanted to work with U.S. Kids Golf.

“With the tee system, golfers can now play the same game as the Tour pros where you hit a driver and a 7-iron to a par 4,” he said. “That’s 475 yards for them, 425 for me and about 180 yards for Johnny 8-year-old. Age, gender and handicaps don’t mean anything. It’s all based on how far you hit your tee shot.

“By scaling the tees apart, everybody can play the same two clubs into a hole. Now it’s a fair fight.”

Van Horn came up with the tee system because he wanted to keep his two children interested in playing golf.

“The idea I had from 20 years ago was, if a kid plays golf he wants to make a par,” he said. “So, how was I going to get a 6-year-old to make a par? Well, I learned how far a 6-year-old could hit the ball and how to set up a course for that.”
Longleaf has the traditional four sets of tee boxes that most courses have but then adds three more sets of tee markers at the edge of the fairway closer to the green, 25 yards apart. It’s a system that the American Society of Golf Course Architects has endorsed. Noted architect Rees Jones has become the national spokesman for it.

And it’s a system that all involved believes every golf course should use.

“It helps grow the game and keep people in the game longer,” Hardy said.

“We are recommending it for all golf courses and people are listening,” Van Horn said. “Our senior women play 3,200 yards and they love it. A par is now a realistic score and it improves pace of play.

“There’s no going to a bigger hole, or doing foot golf or making the game different. It keeps all the traditions of the game alive, while making it more fun and making a good pace of play.”

“It’s a game changer,” added Cowell. “It makes people have fun. Everybody who has tried it, loves it. I’ve had a few people resist but not many. It’s so logical, you can’t argue with it.”

Almost as popular as the tee system at Longleaf has been the par-3 course. It is called Bottlebrush because that is the stage of a longleaf pine tree when it is establishing its roots. The course is located between the 13th and 14th fairways and the longest hole is 100 yards.

“It’s a ton of fun,” Cowell said. “We play it all the time. You can play it in 20 minutes. It’s a great warm-up for a round instead of banging balls on the range.”

Three big projects are in progress this summer at Longleaf. The greens are being resurfaced with Mini Verde Bermuda grass to make them more heat tolerant. They should be ready for play by September.

The inside of the large clubhouse is being remodeled with a new restaurant, kitchen and bar area. The rest of the clubhouse is getting new carpet and other upgrades. A new outdoor area is being established with a retaining wall.

Finally, a building for the U.S. Kids Golf Academy will go up next to the practice range. It will have two hitting bays and be equipped with all the modern teaching technology such as launch monitors and simulators.

Hardy, who has more than 200 youths now in his golf academy, said the building will be the centerpiece of the grand plan at Longleaf to keep families involved in golf.

“The old scenario was dad spending six hours away from the family on Saturday and Sunday to play golf,” he said. “That was the rule of the past. We’re flipping that around. Longleaf is the new model of the way the golf industry needs to go.”

Van Horn’s visionary thinking could help a golf industry that has struggled for more than a decade to keep players and attract new ones. Last year, the U.S. Kids Golf World Championship drew more than 1,500 players and their families to the Pinehurst area. They represented more than 50 countries.

“I’m a dreamer,” Van Horn said. “We first came to Pinehurst in 2006. Coming to Pinehurst is a fantastic thing. The people here have really welcomed us. They like the event. It’s good for business for everybody.

“This is all about spending time with your kid. There’s no other sport like it where you can actually be in the center of the ring. You can’t be in a baseball game unless you’re coaching and watching.”

The focus on family is right there in the Longleaf name now and Hardy thinks that’s a good idea.

“Longleaf and U.S. Kids want to make this a great experience from the time you get into the parking lot,” he said. “Everything will be top notch. The seven sets of tees create a great experience for golfers of any level. It has been eye opening. Getting families involved is the only way junior golf will grow.”