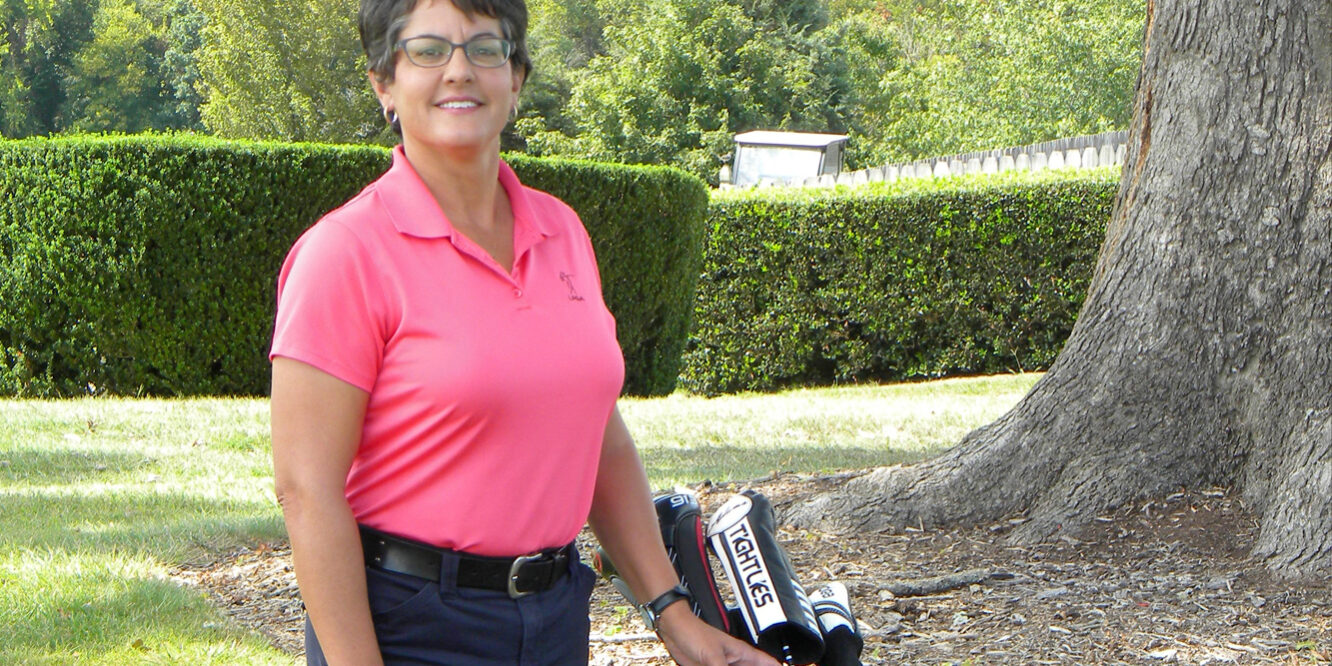 Anne Marie Goslak proclaimed at the young age of 3 she wanted to be a golf professional. Maybe that’s why she has a soft spot in her heart for teaching the game to today’s exuberant youth.

“I remember my dad asking me, ‘Are you sure you don’t want to be a ballerina?’ laughs Goslak. “But a golf pro is all I ever wanted to be.”

And she forged quite a golf relationship as “daddy’s little girl” over the years with Ron Goslak, who passed away a few years ago on Father’s Day. Anne Marie, who turned 47 in October, recalls the days when as a female she wasn’t allowed to play at the local golf club until after 2 p.m. on weekends while others declined to pair up with her and her dad because she was a kid – and – a girl.

“My father recognized there weren’t a lot of females in the game so he was proud that I wanted to try it, but you also had to recognize there was a stigma when we want to play as a twosome. The pro would say, ‘Do you mind if this young lady and her father join you?’ And a lot of times people would say no. It was kind of embarrassing at first even though I was the better player,” Anne Marie said. “I was 12 years old and shooting even par and people didn’t want to play with me. That was kind of hard for my dad, but I kind of got used to it. Once they saw me play or hit the ball then it was a different story.”

Anne Marie was one of the top junior golfers growing up in Pennsylvania, good enough to earn a scholarship to Wake Forest University, where she graduated in 1990 and went on to play a decade of professional golf on various mini tours.

But not on just any mini tours.

Anne Marie was struggling to forge her way into the professional big time as bills continued to pile up in the mid 1990s. Looking to reduce her travel expenses and play in more tournaments, Anne Marie did some investigating into the by-laws of a North Carolina mini tour. She found that the tour had no documentation saying you had to be a male, just that you had to be a professional. So she petitioned to compete against the guys.

“They had this big meeting and they were asking silly questions like well, ‘What happens if the guys have to use the restroom and they are used to (urinating) in the woods and they can’t, will it mess up their game?’ Just stupid things that they threw at me,” she said. “I said ‘not a problem, as long as they don’t (urinate) on me.’ It was a little bit of hazing the first couple of tournaments, they would stay stupid things or say silly things, but eventually I finished third in one tournament and they quieted down.”

In the end, Anne Marie never made much of a living as a professional golfer.

But her alternative golfing dream, of becoming a teaching professional, has more than panned out. She recently was named the LPGA and Club Professional Southeast Section teacher of the year as a member of the staff at Oak Valley Golf Club in Advance.

“I wish I would have gotten on Tour, but I realize now the lessons that I learned then have helped me become a better teacher now,” she said. “I recognized what I lacked, I lacked a lot of the mental game, course management and the strategy, and I recognize now that it’s not about having a good swing. I had a very good swing, in fact they used to joke that I had the best swing to never make it on Tour. I spent years trying to perfect my swing and it was really about the holistic approach to the game, about the mental game, course management and the short game.

“It was a very painful failure for me. I felt like a failure for years … but when you look back it all makes sense now.”

“I am very proud of that,” she said. “I had 11 in one year that got to play in college, from Princeton to Wake Forest to Auburn.”

“I tend to specialize in helping 12-15 year-old kids become champions and play college golf, so if I have a niche that would probably be it,” she said. “It has its own challenges because teenagers are sometimes hard to communicate with, but I connect with them on a different level than maybe their parents, maybe because I’m still emotionally a kid.”

And maybe subconsciously because of her early female discrimination on the links she is one of the state’s leading advocates, leading voices, in the growth of the women’s game. Recently, Anne Marie started a local chapter of LPGA-USGA Girls Golf.

“It is nice to be a part of changing the face of the game and having the game be inclusive to everybody and not just one demographic,” she said. “I’m also lucky enough to be involved in an organization like the LPGA Teaching Division that is cutting edge, teaching you about neuroscience, ball flight laws and how to better communicate with your client. It is second to none.”

Anne Marie says the LPGA Teaching Club Professional Division does a really good job training its teachers to stay “student centered” so not every lesson is exactly the same.

“I really try to find out what the student needs, what are they trying to achieve and what can we do based on their abilities,” she said. “So, I start with what can I make out of the student. Can we make them a Tour player, a club champion or make someone who just wants to break 100 so they can play with their spouse? Their goal then becomes my goal. It is based on their skill level and willingness to practice.

“Most of what I teach is based an anatomy, kinesiology and physics. I try not to get too technical, but you have to understand what the body can and can’t do and understand ball flight laws because you can’t argue with physics. I take that complex science and dilute that down into a clear and concise message, and focus on 2-3 things that a client can do to move them in the right direction.”

The national teacher of the year award, selected from the five regional winners, will be presented in November, and represent the best of the 1,600 members of the LPGA teaching and club professional division.

“There are a ton of talented teachers out there; there are literally over 100 people I can name that deserve this regional award,” Anne Marie said. “I really am humbled to be recognized by my peers. It truly is amazing. To win teacher of the year is outside my ability to dream.”

Think back to when you were 3 years old Anne Marie. Sometimes dreams do become reality.