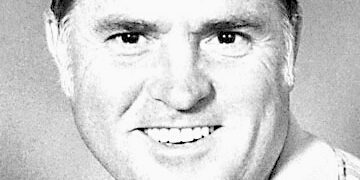 (NOTE: Ed Dupree is a former columnist for Triad Golf Today and Triangle Golf Today who wrote about his adventures of playing as many North Carolina golf courses as he could. Former newspaper colleague Tim Peeler reflects on Ed’s life.)

Ed Dupree couldn’t just tell you which of the 565 golf courses he had played in North Carolina. In most cases, he could tell you the date, the weather, the fairways hit, the greens-in-regulation and the number of putts he had on the day he played.

So specific were his scorecards and spreadsheets he could also tell you how much he paid each time he played, though in later years as a member of the North Carolina Golf Panel that rates the state’s golf courses, greens fees were waived.

Dupree, a former sportswriter and sports editor for UNC’s Daily Tar Heel and The Salisbury Post (and others), whose goal was to play each of the 552 currently operating courses in the state of North Carolina, came up 30 rounds short.

He died on Nov. 21 at Glenn A. Kiser Hospice House in Salisbury of leukemia. He was 76.

Few people would ever have the chance to match Dupree’s impressive career total, since 43 courses he played in the state are now closed. Not all of the ones he identified on his spreadsheet are listed in state golf course guides. Some were small nine-hole executive courses, like the one at NC State’s Faculty Club in Raleigh. And some were privately operated or family-owned fields or once-manicured courses he talked his way into playing.

Just so he could say he did.

Golf was hardly Dupree’s only passion. He collected baseball cards [more than a million] and fantasy baseball championships [nearly 100 in his the three leagues he helped start in the 1980s]. He was a long-time track coach in his adopted hometown of Faith, teaching hundreds of kids in his Faith Flyers AAU running club a lifelong devotion to fitness.

True to his personality, Dupree began a streak of running on June 23, 1993, that ended because of a torn hamstring just a few weeks before he died. He ran a minimum of one mile—almost always more—for 8,847 consecutive days, rain or shine, wind or snow, indoors or out.

He catalogued every mile that he ran throughout his entire life, including the 13 marathons. All told, he ran 41,093.5 miles.

He, of course, had a spreadsheet.